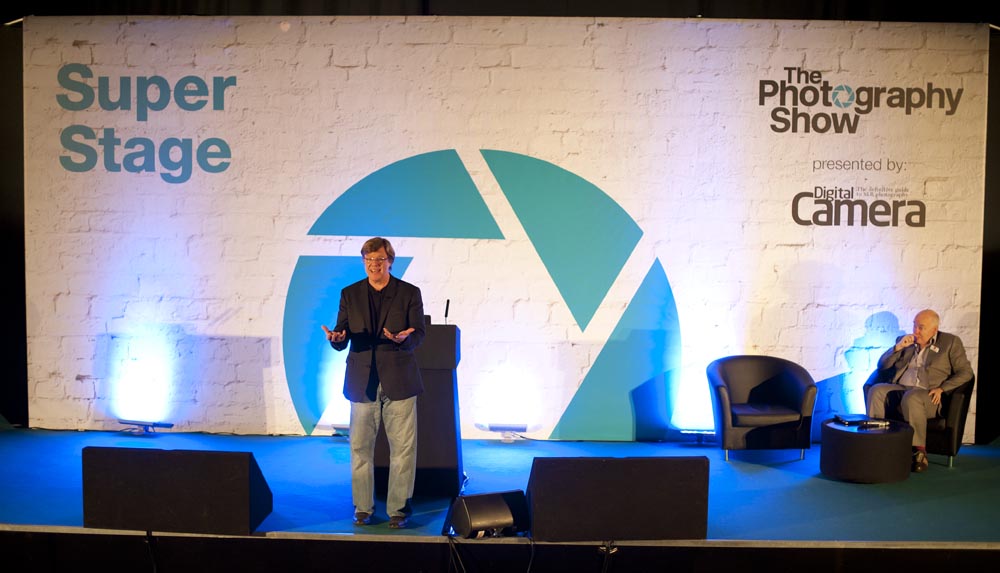 Just arrived back from two days at the N.E.C. Birmingham. It was the inaugural UK Photoshow. I’ve been attending “Focus on Imaging” at the NEC for many years and have witnessed massive changes in photography in that time. The early “Focus” events were exciting, with seminars and talks by celebrity photographers – I think Patrick Lichfield was there one year and I remember a talk by Stu Williamson and a stunning photo of a model covered in black treacle! The term “Digital Photography” did not exist and visitors to the show drooled over film cameras by Hasselblad and Rollei and Leica. There was all sorts of darkroom equipment from developing tanks to enlargers, tripods, filters, flash guns and studio lighting. And then digital cameras appeared on the scene. The first models were horrendously expensive and viewed as a novelty by many. But as with all things electronic, the technology moved at a pace and gradually the new cameras became better and better and then cheaper and cheaper. My first digital camera was a Fuji S1 Pro, based on a Nikon 35mm film camera body but with Fuji’s digital sensor and electronics. It was only 3.2 megapixel but gave excellent results. Gradually, Focus on Imaging’s stands included more and more digital equipment and less and less film equipment and a huge increase in wedding album’s on display. Sadly no seminars for many years, which is why I was excited about the new Photography Show this year – different organisers, bigger than ever and a great range of brilliant speakers and seminars on all four days.

The highlights from my two days at the show:- Joe McNally gave the keynote speech at Monday’s Pro Photographers Conference. Joe is a photo journalist and for many years his images have graced the likes of National Geographic and Life Magazine. His seminar on Tuesday gave an insight into the diversity of challenges faced by photojournalists. Kate Hopewell-Smith is a wedding and portrait photographer based in Berkshire. She’s built her business from scratch in just 4 years and is now also an accredited trainer for Nikon. She gave an inspirational talk at the Pro Conference. Nikon’s new flagship camera the D4S looks amazing – it’s aimed at sports photographers and photo journalists and can shoot full size raw files at 11 frames per second non-stop for about 25 seconds without slowing down. Try that with your i-phones and Samsungs! I’ve been looking at changing my ten year old printer for a while and finally “bit the bullet” and ordered an Epson 3880 at the show. It’ll print up to 17″x37″ and is recognised as one of the best printers currently available for high quality colour or black & white printing.

Well, judging by all the Tweets and Facebook posts the show was a huge success and I’m already looking forward to the 2015 event and buying that D4S!